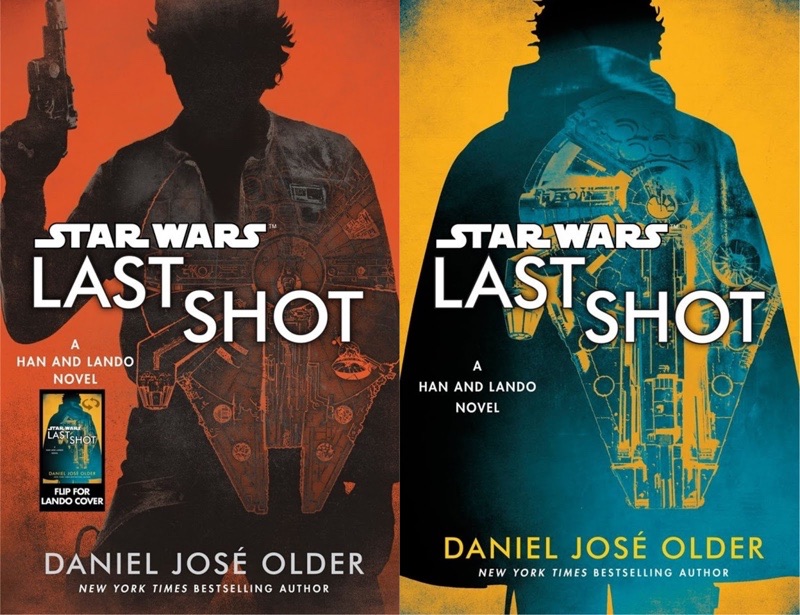 In the Star Wars books, tentpole novels have been very careful at not showing too much about the main characters. Most of these characters end up as secondary characters; some others end up in short mission-driven stories. But with this new novel about Han and Lando, we get a good blend of both worlds. We see our favorite scoundrels and smugglers doing what they do best, dealing also with personal struggles, filling some gaps between what happened to each one of them between Episodes 6 and 7.

Last Shot by Daniel José Older is an action-packed, character driven novel were Han and Lando must fight against Fyzen Gor, an old med student that has planned the destruction of organics with an army of droid assassins. From the very beginning, the storyline is well established. We see Han taking care of a young Ben Solo, dealing with the nooks and crannies of being married to a politician, wondering about his place in the world, trying to be a good father and husband. Lando asks for his help, explaining a recent encounter with a droid that tried to kill him.

The novel, similar to the interludes of the Aftermath series, jumps back and forth in time, detailing some events that happened to Han or Lando decades ago, filling some gaps that allow the current storyline to have further meaning. Fyzen Gor has an impressive development as a villain, with clear intentions and reasons that backup his actions, dealing with the scoundrels in some opportunities during the past. What I enjoyed the most from Fyzen Gor is that he is believable and doesn’t have any Imperial entanglements. Every once in a while it is good to see other types of villains, with a three dimensional background compared to the many generals, cadets, and Sith that lack depth, being made from the same mold.

Daniel José Older masterfully writes the dialogue to Han and Lando, making it as believable as ever. If you don’t believe me, please try to listen to the audiobook and enjoy how the lines blend itself to some great Harrison and Billy Dee impersonations. The novel has some very interesting descriptions, especially considering the language used, for Lando’s clothing and his private encounters with Kaasha, his Twi’lek lover.

You will be surprised with some encounters like Sinjir’s husband (from the Aftermath series), a techie Ewok(yes, you just read that), Lando’s droid L3, some meesa meesa chatter with a Gungan, Mon Mothma and more. Dealing with several characters could be a hassle for the reader and writer alike, but this author blends each one to deliver the needed actions and intentions in the right plot points. No characters fell flat or two-dimensional right away, which happens when writers juggle different characters at once. Each characters contribute with the story, offering a unique style and pacing to the novel.

Other details that shine throughout the novel are the passages were Han is dealing with his family, his personal life, trying to balance them out. These deep, internal conversations allow us to understand better why he eventually leaves Leia after Ben turned to the dark side. This wasn’t José Older’s job, but he makes a damn good work in this aspect.

This could be, next to From A Certain Point Of View, one of my favorite Star Wars books so far. It is a great introduction for someone looking for a starting point because you don’t need as much information from other books, focusing mostly on Han and Lando. Daniel José Older has got me hyped for the Solo movie; he needs to work on some more Lando novels too. For anybody looking to get his Han Solo fix while waiting for the movie, this is an excellent book, filled with details that will make you enjoy more the movies but isn’t mandatory reading to understand it.